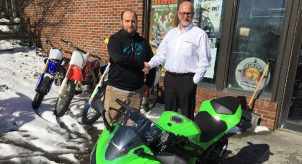 Attendance reached new heights at the 2015 PACK EXPO (Las Vegas, Nevada) and FABTECH (Chicago, Illinois) trade shows, and so did the ballot entries for this year’s Kawasaki Robotics Motorcycle Sweepstakes.

Each year, tens of thousands of professionals from numerous industries attend these popular trade shows to learn about new production technologies, discover solutions for increasing efficiency, and see machinery in action. Kawasaki Robotics’ exhibit showcased the latest in robotic automation technology and also featured what has become a yearly sweepstakes for a Kawasaki motorcycle, capturing the interest of hundreds of attendees daily.

Ballot entries for the 2015 Kawasaki Ninja 300 motorcycle poured in from hopeful show goers and were accepted throughout both shows. All ballots were combined and the winner drawn at the end of the FABTECH show. Kawasaki Robotics is pleased to announce that the winning ballot was entered by Scott Daniels from Burnsville, North Carolina. Mr. Daniels had decided to try his luck at FABTECH, and was elated when he learned he had won.

Although Mr. Daniels had to brave the elements by traveling through four inches of snow at the end of January, he safely made it to the Kawasaki dealership to claim his prize. We thank Mr. Daniels for his enthusiasm and we hope he has many safe and exhilarating rides on his new Kawasaki motorcycle!