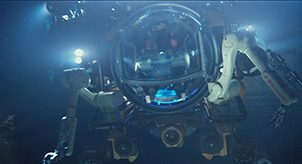 Did you catch them? Two Kawasaki RS010L robots make an appearance in the Transformers film series’ fifth installment – Transformers: The Last Knight.

In the movie, Transformers and humans are at war and Optimus Prime has left Earth.  Saving the world falls on the unlikely alliance of Cade Yeager (Mark Wahlberg), Bumblebee, an English lord (Anthony Hopkins) and an Oxford professor (Laura Haddock).  As the group unveils the hidden history of Transformers on Earth, they embark on a journey to find the key to saving our future, an ancient Cybertronian staff. With Yeager’s help, the professor uncovers secrets from her dead father’s past and learns that they must take the HMS Alliance submarine into the sea to find the staff.  As they travel to the depths of the sea, they are followed by another submarine equipped with the two Kawasaki robots. Aboard the submarine in their pursuit are agents from the Transformers Reaction Force (T.R.F.), a paramilitary organization formed to destroy Transformers of all factions.

If you haven’t already, be sure to see the movie to get the full story and enjoy impressive special effects!

Learn how Kawasaki robots can “transform” your manufacturing process and improve productivity and quality: